Web forms are a great tool for encouraging your website visitors to engage with your organisation. You can use web forms for information requests, booking of appointments, online purchases, feedback and surveys, recruitment – pretty much whatever you need.

Web forms can also be a frighteningly efficient way of making people so thoroughly cheesed off that they lose the will to do business with you.

Here are fourteen ways to irritate the heck out of your customers – web form features that you might want to consider avoiding. 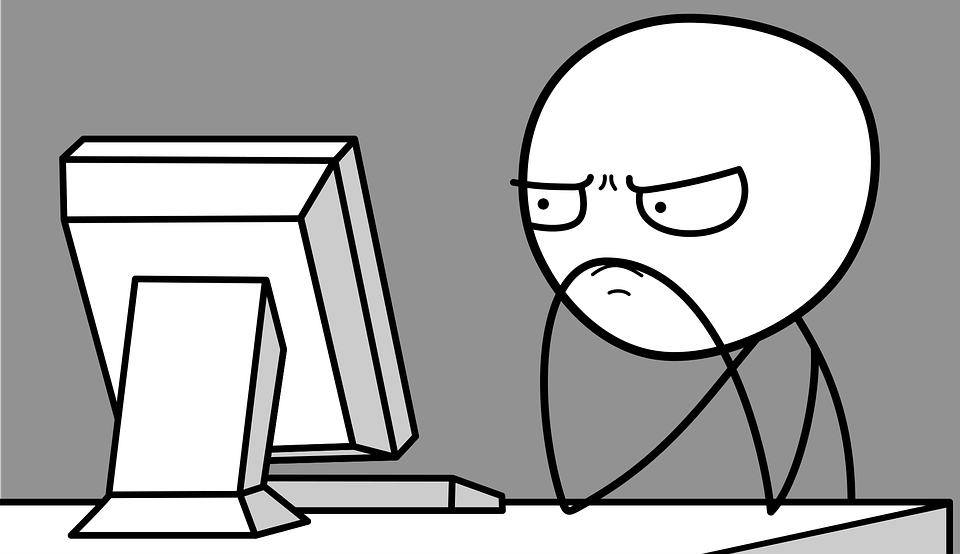 Beneath the email field, have another field labelled “Re-enter email address” or “Confirm email address”. This is a way of saying to your would-be customer, “OK, stupid, we know we can’t trust you to spell your own email address correctly.” To make it even more annoying, you can also disable copy-paste and auto-fill, so that even the more web-savvy users are forced to type their email address twice before you’ll allow them the privilege of doing business with you.

Set your form up so that when the user makes a selection, the form suddenly jumps up to the top of the page and they have to scroll down again and find their place before they can carry on. Some online banking forms manage to make this happen three times in one transaction. That takes practice and not everyone can do it, but you should be able to make it happen once or twice if you try.

You know, those splendidly illegible pictures of text that people have to copy to prove that they’re not spam bots. Never mind that a vast proportion of humans can’t do them (and just end up aborting the transaction) while many robots can get past them with ease. These days, you can use reCAPTCHA – a checkbox labelled “I am not a robot” – and there are even ways of running your anti-spam software behind the scenes so that the user doesn’t need to see anything. But there are still organisations out there using the good ol’ CAPTCHA to shoo their would-be customers away.

The human eye can easily follow and copy four blocks of four digits with spaces or dashes in between. Once you start presenting sixteen digits all clobbered together, most people will struggle. That’s why the long number on your credit card is set out as four blocks of four digits. It’s basic usability and a courtesy to the reader. The banks understood this decades ago. A great way to drive paying customers away from your website is to make them copy all those digits into one big block before you’ll let them buy from you. To make it even more annoying, you can always not warn them in advance – wait till they’ve entered the number as shown on the credit card, with spaces in between, and then serve up a yah-boo-sucks-to-you error message and tell them they’ve got to try again.

Same principle as the credit card number. It’s easier for the human eye to accurately read a phone number when it’s shown as a dialling code followed by a subscriber number with at least one space in between. You can annoy people a little bit by forcing them to close the space. And as with the credit card, you can really wind them up by not forewarning them. Let them type it as they like, and then reject it.

For example: “You must enter a valid postcode [schmuck]” or “You have entered an invalid telephone number [you nincompoop]”. If you want to irritate people even more, try writing your error messages all in bold red block capitals – and throw in the odd exclamation mark while you’re about it.

At the opposite extreme, you can always try using a polite, generic error message like, “There was an error.”  Leave the poor user to figure out whose fault it was and go back over seventeen form fields trying to figure out what they did wrong.

If, say, you’ve got a calendar form and your user accidentally tries to book an appointment on a past date, a nice error message would be, “This date occurs in the past. Please check and try again.” If you want to perplex and annoy them, you could, instead, write: “ERROR – current-date must not be greater than value”.

If you have a Mr/Mrs/Ms title dropdown, provide a random selection of possible titles with no “Other” option – for example make people choose one of Mr, Ms, Rev or Lord, but don’t let them be, say, Dr or Lady or Sir or Prof or anything else that doesn’t conform to your rules.

Received wisdom has it that a password must be strong: it should be so many characters minimum, it has to contain at least one capital letter, one lower case, one numeral and one special character such as an underscore or @ sign – or some such set of rules. To make your new subscribers jump through hoops before they can sign up, try setting strong password rules but don’t tell them until after they’ve carefully typed their desired password twice. For extra annoyance, you can also set a maximum and/or minimum character count for the password and not tell them.

You know how by default most web forms don’t display the password as it’s typed, presumably for fear that the password may be stolen if it’s visible. The result is that the poor users often mistype their passwords – especially if they’re strong, complex passwords, and especially if they’re using a fiddly smartphone keypad. It is perfectly possible to offer a “show password” option for the benefit of people who prefer to see what they’re typing and are prepared to take a chance that they’re not being spied on by some opportunistic villain looking over their shoulder. But why make it easy for people?

This one works particularly well in feedback surveys. Your marketing people want to know the age and gender of the respondent. That’s understandable. However, maybe some of your customers don’t want to give you that information. They just want to write a review or rate the service or whatever (which, bless them, they think will still be helpful to you even if you don’t know how old they are). To foil them, why not set your form up so that it makes, say, “age range” a mandatory entry and won’t let them give their feedback unless they first select an age range. Some people will lie about their age to get back at you; others will abort the form.

Don’t have a “Form successfully submitted” confirmation page. Don’t set it up to send a confirmatory email. Just make it so that nothing seems to happen when the user clicks on the submit button. That way, they’ll never quite know whether it worked and you can sometimes even get them to submit the same form multiple times in a futile attempt to know whether it’s gone through.

Finally, here’s a trick that is guaranteed to raise a few hackles: set your form up in such a way that when the user makes a mistake, the whole input gets wiped and they have to start over.

View all posts by admin

Web Content Works is a trading style of John Clifford.